This research line at TU/e SEC is led by Dr. Luca Allodi and is focussed on quantitative aspects of cybersecurity risk assessment. This line of research is also informed by results from the attacker economics research track.

However, fixing vulnerabilities means modifying existing software. This is generally undesirable as modifications may, apart from fixing the vulnerability:

The IT response to that is, in general: “any severe-enough vulnerability must be fixed”. The industry standard to measure vulnerability severity is the Common Vulnerability Scoring System (CVSS) by NIST, but this is known to be uncorrelated with actual exploits (Allodi et al. TISSEC 2014). The Figure on the side 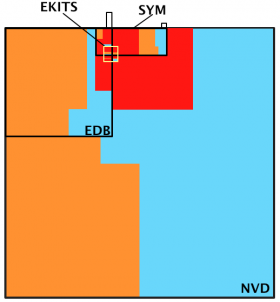 This led to poor vulnerability management practices whereby vulnerability patching work is overwhelmed by the huge number of patches to install, that cannot however be straightforwardly applied because of the concerns outlined above.

This reflects the general concern that attackers may get in through any available path, i.e. may exploit any vulnerability anytime. Policy considerations on this can be found in this article.

Attacker environment and risk of attack

Cyber-attacks can be roughly classified in two categories:

Whereas targeted attack scenarios vary on a case-by-case basis, untargeted attacks can be more generally characterized. Due to the relevance of the latter on the overall threat scenario, in the remainder we focus on this.

Untargeted attacks are used to achieve a number of impacts on victim systems; for example, installing banking Trojans; stealing credentials, credit card numbers, and other private information; using infected systems to mine bitcoins or other virtual currency; launching denial of service attacks through botnets; etc.

This lead to the commodification of cyber-attackers whereby attackers can buy attack technology and products of attacks (e.g. spam services) from other attackers.

While this obviously simplifies the attack process for the attacker (who does not need to be technically sophisticated to engineer all attacks from scratch), introduces limitations in the likely sources of attack as these will coincide with the market’s offering/portfolio. More details on this are given at this page. 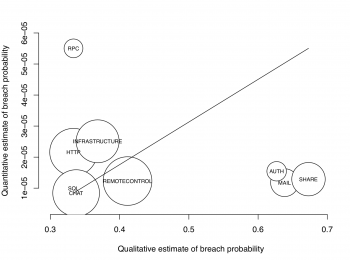 shows the disparity between a traditional, matrix-based, qualitative risk assessment for different asset types in a network (data from a large EU organisation in the financial sector), and a quantitative approach. Size of bubbles is proportional to number of assets in that category. The mismatch is clear, both in the scale of the prediction, and in the relative ordering of asset criticality. For example, according to the internal assessors MAIL, SHARE, and AUTHentication services represent the highest risk, while the quantitative method assigns those to amongst the lowest in the relative ordering. The important aspect to consider here is that the quantitative method is a white-box one, whereas the qualitative approach is a black-box and cannot be reproduced (as a different set of experts will likely come up with a different assessment (Cox RISA 2008)).